After 5 months of development, GMMP 2.1 is finally here.  This release was mainly a stop gap between 2.0 and 3.0 which will have an entirely new UI.  There have been some long awaited features that I felt needed to be added before dropping support for some older versions of android.  2.1 drops support for jelly bean and 3.0 will drop the support for kit kat.  However 3.0 is a long ways away and will truly benefit all the 5.0+ users since google added some great UI apis in android 5 (like the animation api).

The new update will be rolled out to 20% of the users today and I will increase that to either 50% or 100% depending on whether issues pop up.

Some of the bigger newer features are as follows:

The ability to share what you are playing with others in text form and file form have been asked for by tons of users and gmmp 2.1 finally adds that option. 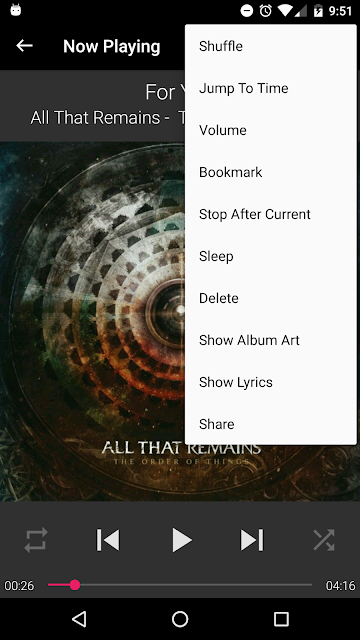 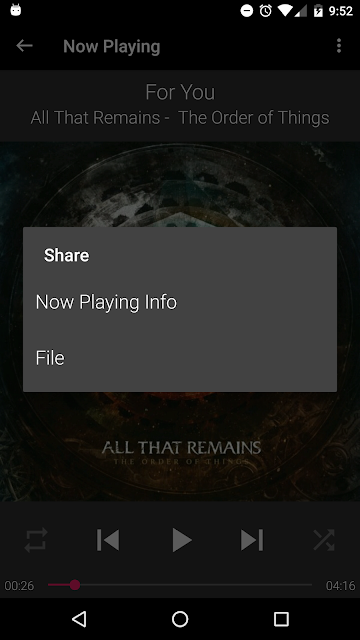 Selecting Now Playing Info will let you share the name of the current artist and song you are playing in text form.  Selecting file will send the file to whatever app you select.

GMMP will now give you the option of higher resolution album art than what was previously offered.  The auto download will still choose the original source first (so lower end devices arent auto downloading 1600x1200 images), however the album art selection UI will show the highest quality image first assuming there is a match.

Voice commands and text searches will now allow you to play music in GMMP. 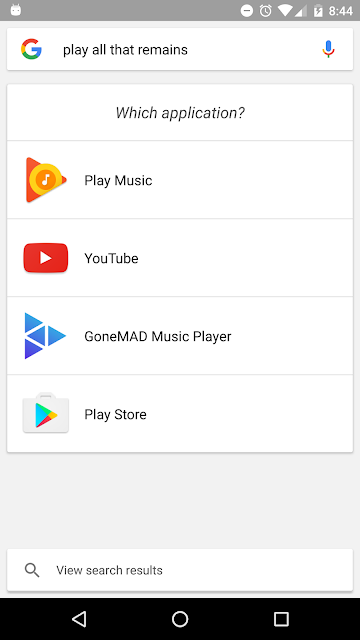 Keep in mind that Google Now is in charge of translating the voice into a search command into GMMP, so it will only work if google now finds something on the device.  By default it will also search play music streams.  So it might be beneficial to turn off play music as one of the searching options in google now

The last big new ability in GMMP 2.1 is the ability to save ratings to the tags of the audio file.  This happens by default when you rate your music.  For those with tons of music already rated, you can use the "backup stats" option in the settings and it will not only save the stats to the stats.dat file, but will also save any ratings in the gmmp db into the tags of the audio file

Posted by GoneMAD Software at 4:51 PM

After all this time of getting reports of GMMP not showing up as a "default music player" I was able to fully understand what the issue is.  It wasnt until recently that someone specifically mentioned google now + default player (the first part was always left out, so i made the assumption it was the default player when opening files), so I started playing around with google now's "play X" voice commands.  GMMP did not show up there and after a little research into the voice commands, I decided it would be worth the extra day or 2 to add that in before closing out the 2.1 beta.

2.1.0 Beta 6 (10/07/2016)
-Fixed issue where sdcard write access is not saved when using 'save to playlist'
-Fixed crash when saving new playlist
-Force left align for text from tags stored in a RTL language
-Backup stats will now save ratings in the tags if they are not already set
-The trial expired / invalid unlocker message pop up will now launch straight to the unlocker in google play / amazon when okay is selected
-Improved parsing of synchronized lyrics
-Added google now voice command support for playing artist, album, or song
-Fixed crash during song transition
-Reset trial
-Updated translations

Posted by GoneMAD Software at 10:08 PM