I added the ability to choose between 2 different now playing layouts.  The original layout has been tweaked so the album art no longer gets cropped.

As you can see from the above screen shot, there is a lot more empty space on some phones.  I have plans for a future beta to add more optional "quick action" buttons to take advantage of the extra real estate.  You can also customize the metadata displayed to show more lines (see next section).

In beta 2 you can now choose from a couple hundred different metadata presets.  A future beta will expose more metadata options and the ability to create completely custom lines, but for now you get to choose from a list of presets.

Presets are broken down in to multiple categories.  The 3 main categories are: Minimalistic, Default, Detailed and each has 4 different size variations.

So now you can easily fill in some of the extra empty space in now playing with a more detailed metadata display.

Here are the landscape versions of both layouts

Note: Large playlists may take awhile to load.  Performance will be improved in future beta updates

Fixes:
-Fixed crash in the folder view when no scan paths are present
-Fixed other various crashes
-Fixed bug where Save Queue To UI kept popping up
-Reordering queue after track deletion should now work correctly
-Fixed issues when deleting multiple tracks that are in the queue
-Now playing album art should now maintain a 1:1 aspect ratio in art has the same height and width
-Removed radio buttons from jump to playing dialog
-Fixed long press in album details view when context menu is hidden
-Swipe to delete fixed in view order ui
-Fixed bug causing On Queue Completion -> Play Next Folder to fail
-Fixed scanner notifications not showing
-Fixed crash when changing tracks rapidly
-Fixed queue positions when upgrading from 2.x
Posted by GoneMAD at 2:18 PM

I just pushed 3.0 beta 1 to the play store and it should be available to download in the next few hours.  Anyone that was part of the 2.x beta should still be in the 3.0 beta.  For anyone else there are instructions on how to join the beta here: https://support.google.com/googleplay/answer/7003180?hl=en

I created a new thread on the forums for the beta, so please post feedback there: http://gonemadmusicplayer.proboards.com/thread/1049/gonemad-music-player-beta-feedback

Complete rewrite besides the audioengine.  See about -> changelog for all 3.0 Alpha changes

The beta will be split into 3 main phases:

Note: Please refrain from emailing / posting about missing customizations.  I am well aware they are not there yet and will be readded throughtout the beta (phase 1 above).  The point of the alpha was to add all the functionality and the beta will be about customization and polish.  If you require those customizations immediately you can leave the beta and go back to 2.x until 3.0 sees a final release.

I don't have a good estimate on how long the beta will take, but I do know it needs to finish sometime before google forces all updates to have their target api set to android 10 (which I believe is october-ish).  Apps targeting android 10 are forced into using scoped storage which requires a lot of modifications to support.  I'll eventually update to support it but that wont happen until 3.0 is finished.

Alpha 19 marks the end of the alpha barring any major bugs.  All future updates will be via the google play store.  I will post when the beta has started with instructions on how to sign up.  I am planning for the beta to start right around the start of the new year.  I want to give this alpha some time to get tested since I will have to remove the main bug reporting tool before posting on google play due to the GDPR.  Google play does have its own bug reporting but its not as good as fabric.

I made some improvements to the art searches and also updated the scanner to run an auto search if no artwork is detected on the device.  To prevent hammering the search providers, I limited the queries to 1 artist/album a second, so large collections will take a long time to fully populate the art.

Android 7.1 (i think) added the ability to add app shortcuts to the icon on the homescreen.  GMMP now has 3.  Play, Shuffle All, and Search.  Play and Shuffle all allow control of gmmp without opening the UI, and search will launch gmmp right at the search screen. 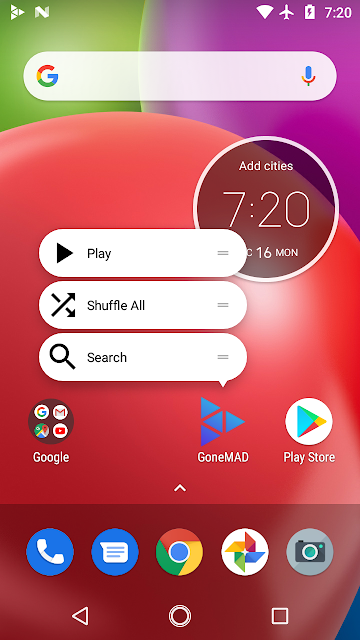 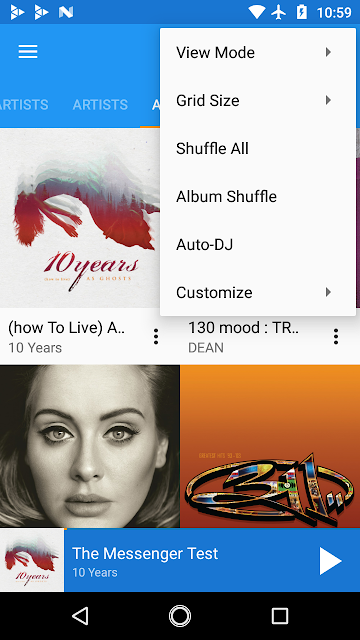 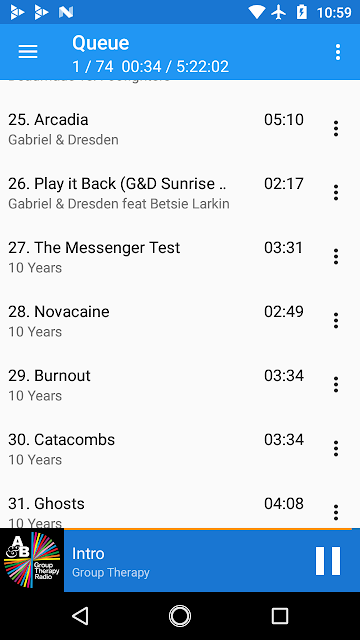 Alpha 18 adds the ability to search for artwork for artist and album artists.  I added in 3 internet based artist artwork sources and also added 2 more album artwork sources.  Selecting 'Artist Art' from the context menu will now bring up the artist art selector UI.

Items in the art selector now have a 3 dot menu with 2 options.  Select and Preview.  Select will choose that image for the artist/album/album artist.  Preview will pop up the image in a bigger display.  This helps with picking the best quality image.  Right now only one of the art apis actually returns the resolution of the image, so the preview is the best way to make sure you are picking the right image.

The artist and album artist detail views now will also show the artwork if present.

Since artists have imagery now, it made sense to add a grid view.  In the process of adding that I ended up adding a few more options and redid the view mode menu to make it less cumbersome.  Library views with imagery now have 4 main options: List, List: No Art, Grid, Grid: Compact.  Additionally there are 2 other options to modify those views: Cards and Context Menu.  Cards will toggle between using the card ui, and context menu will let you turn on/off the 3 dot menu.


If the context menu is turned off, a long press of the item will bring up a dialog with all the options / actions that the 3 dot menu contained.  If you would like to start multi-select, choose the 'select' option at the end and that will enable multi-select mode.  Also note that the ugly default "no album art" image is used when there is no artwork.  Now a letter based image is generated using the first 2 letters of the item with a background that uses the primary and primary dark theme color. 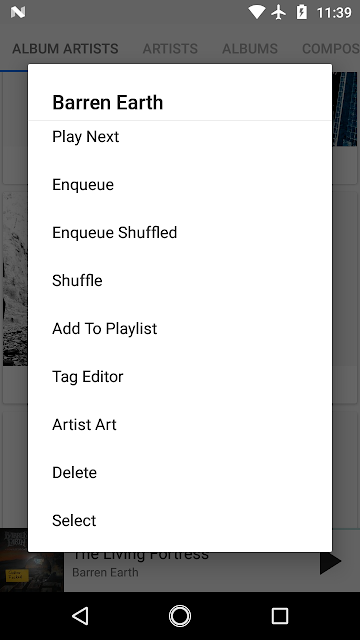 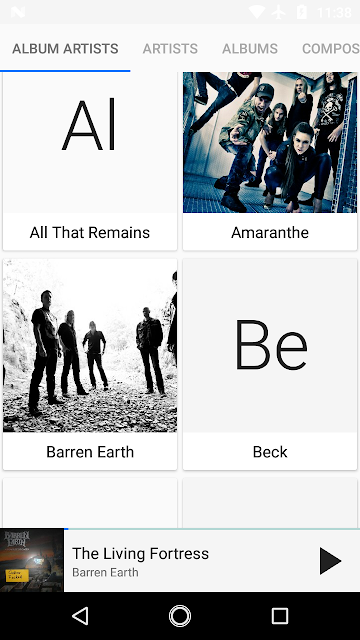 Fans of the 2.x holo theme will be happy to see the split mode is back.  Right now its only available for large displays / tablets (it uses 600 density independent pixels for the shortest dimension as the cutoff currently), but a future update will allow smaller devices to toggle it on in the options (it will be always on for tablets).

Split mode basically takes the screen and splits it in half.  One half will always show now playing, and the other half will show the view you navigate to. 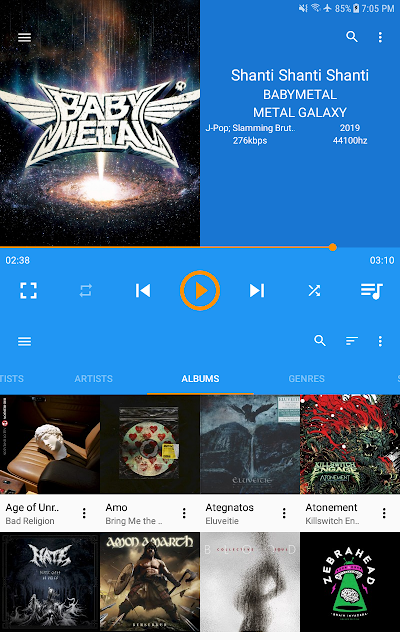 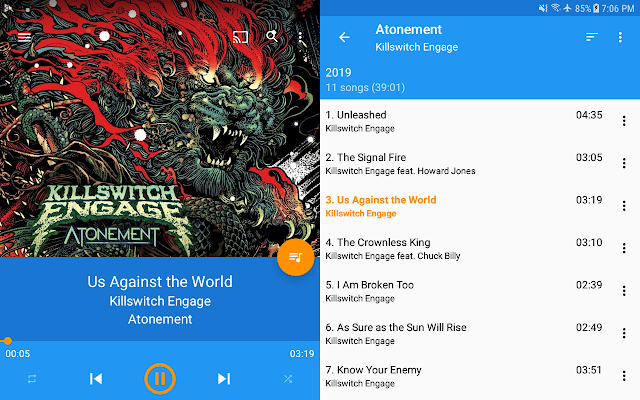 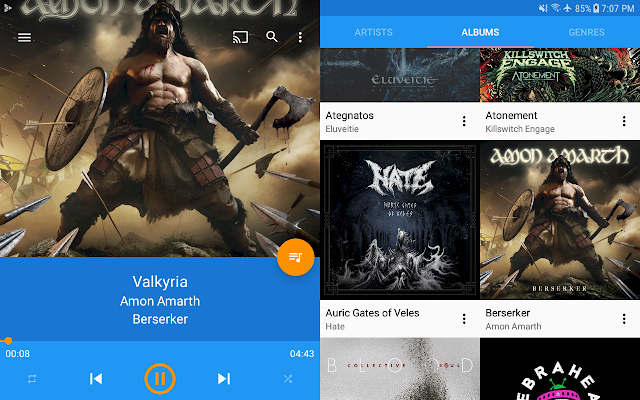 I have only tested on a nexus 7 and a galaxy tab e 8in so far, so I am not exactly sure how this layout works on the 10 in tablets or chrome books.

Split view will certainly be improved over the beta, but this is it for tablets for now.  Both tablet and phone UI will get improvements with the album art as well.  The goal is to show art with the correct aspect ratio without clipping part of the image.

The addition of auto dj caused me to rewrite some of the logic for crossfade.  Previously there were some crossfade options that weren't exactly straight forward, so I simplified things.  Under the crossfade mode there is now just a "Auto Crossfade Mode" with 3 options:

Smart Crossfade does require correct album tags and track number tags, otherwise it will just always shuffle.  Smart Crossfade now allows auto dj to not crossfade when playing an album straight and then start crossfading again when auto dj starts adding new songs to the end of the queue.

Fixes:
-Sorting album list by 'Artist' will now sort by artist first and then album name
-Fixed issue where widget would be invisible until gmmp is launched
-Fixed crash with the filter menus
-Ignore case when using 'Ignore Prefixes" sort modifier
-Fixed seek bar preferences not showing selected value
-Fixed preloading of art in lists
-Fixed album details text color when using light theme with a light primary color
-.nomedia is now created in cache folders to keep imagary out of the android media scanner
-Fixed issue where audiobook and podcast tab would show every album/song when selecting an artist
-Fixed now playing when no song is loaded (now treated like no album art)
-Fixed issue where some of the effects UI was cut off 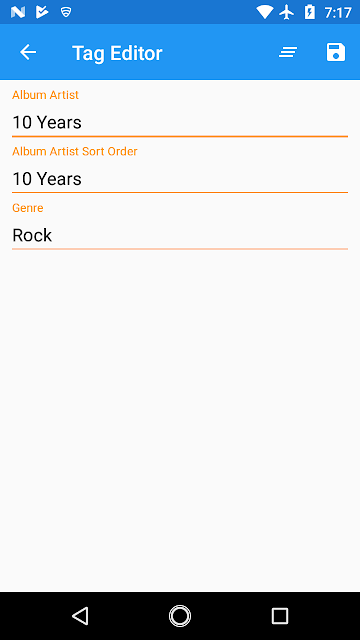 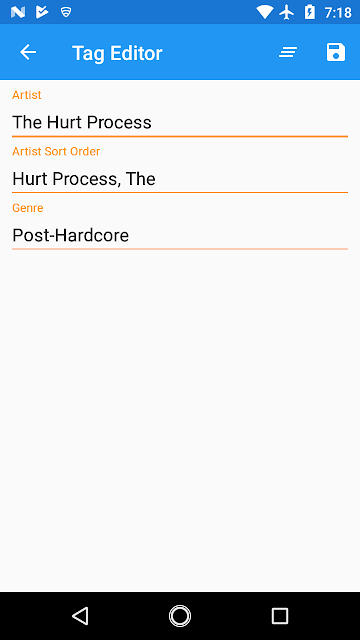 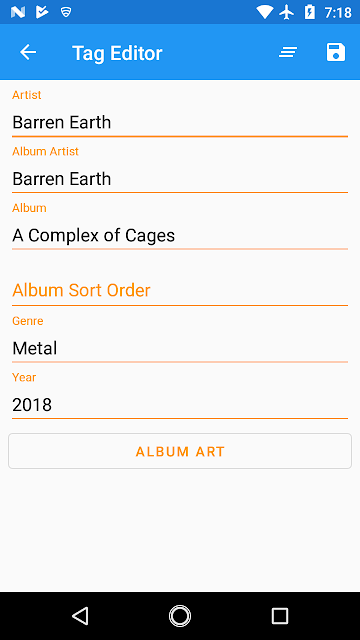 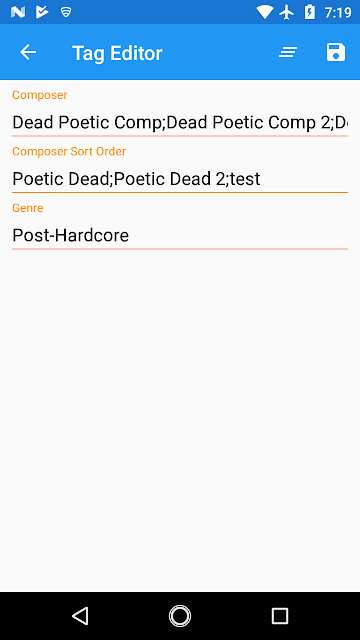 Sorting is always improved by the return of the ignore prefix feature.  This is available to the majority of the lists and by default will ignore 'A' and 'The' prefixes.  In the 3.0 beta I will open this up to customization.  To use these 2 new sorting methods, I added a sub menu under the sort menu named 'Modifier' (if anyone has a better name for this feel free to email me or post in the forums).  The idea behind the sort modifiers is to take the selected sort order and either swap artist/album/etc with their associated sort order, or to take the selected sort order and ignore prefixes. 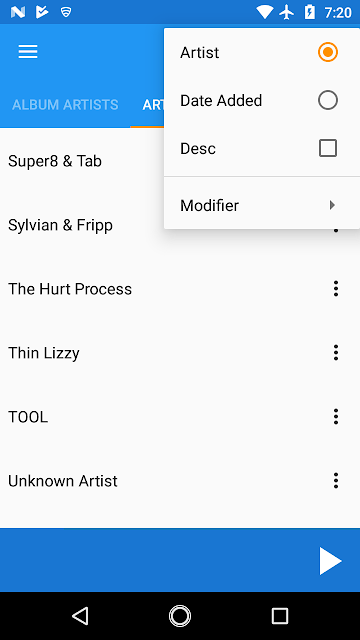 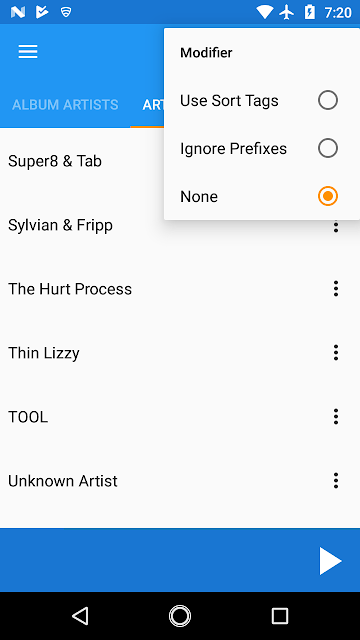 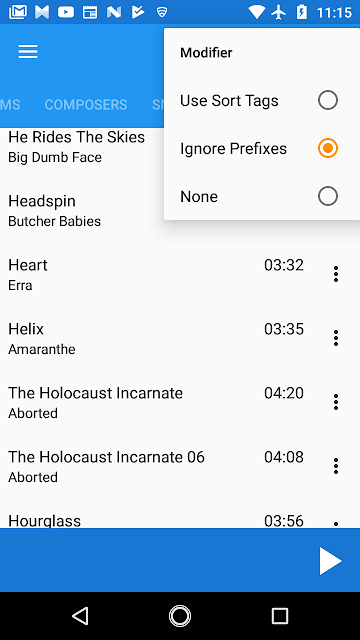 Users of Musicbee should be familiar with Auto-DJ.  As of right now GMMP has a much more limited version compared to musicbee, but it is still pretty powerful.  Auto-DJ playback mode basically keeps your queue populated with songs as your approach the end.  In a way it is similar to some of the On Queue Completion options, but the queue is not reset.  Right now the defaults for auto dj are an initial size of 10 (makes sure at least 10 songs are in the queue), and an upcoming song count of 5 (makes sure there are at least 5 tracks after the actively playing song).  Song selection is determined by either a smart playlist, or the default (random songs from entire collection) if no playlist is selected.  Songs should not be repeated for the most part until the entire contents of the playlist has been played once (this is maintained in the database so it will survive the app being closed).  Customizations for auto dj are planned for the 3.0 beta. 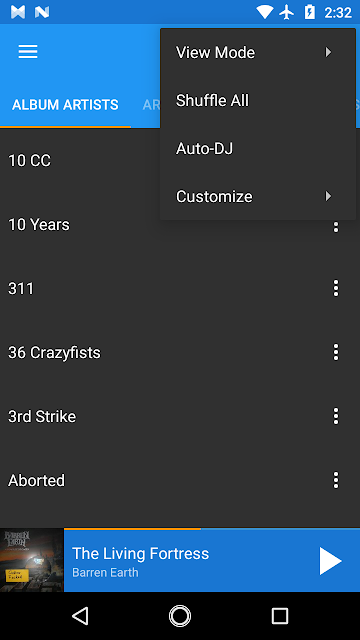